Q&A with Gian Campetti, Chairperson of the SA Bureau of Standards SC23B Mirror Committee on SANS 164-2.

Q: Why has this Standard been introduced in South Africa?

This standard was originally adopted from the International Electrotechnical Commission (IEC) in 1986 and was called “The IEC world wide plug and socket-outlet system” which was a rather ambitious title, given that most countries had their own National Systems and really did not want to have to change to some internationally adopted one. However South Africa persisted and introduced it as a National Standard in 1992, the local manufacturers did not take it up immediately and it took another five years to realise the significant benefits and a further 10 years to complete the work locally. The reason for its introduction and local support was three-fold:

2 – Increased safety for the consumer and

Q: What are the main differences between the old plug and the new one?

This is best described from pictures: 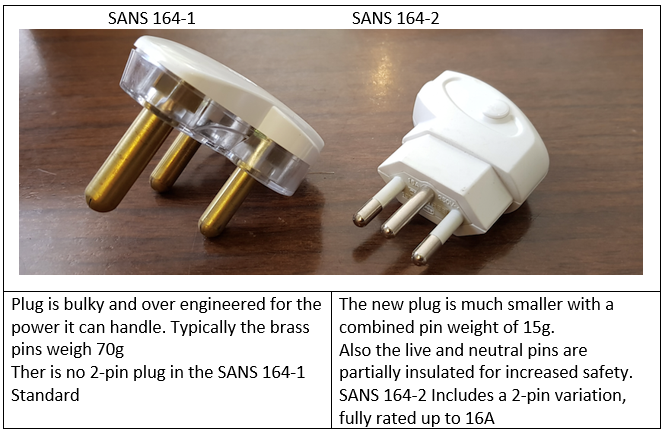 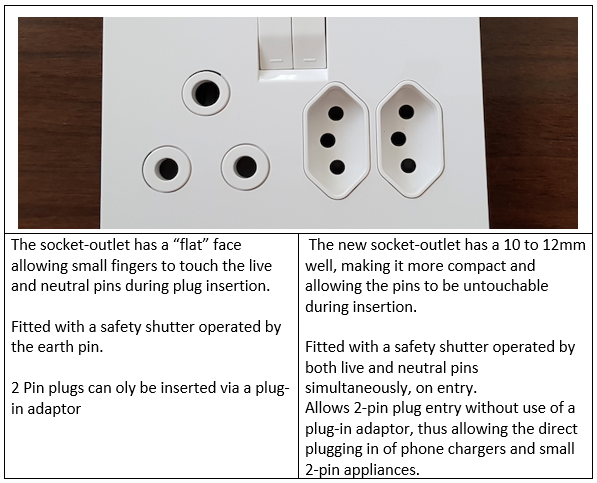 In summary the increased safety features of the new system are:

Q: Are the new plugs mandatory for all new installations?

SANS 10142-1: The wiring of premises; regulates the installation of socket outlets and in the latest edition (2017 Ed 2), it has become mandatory for all NEW installations by way of the following clause:

Q: What has been the uptake by developers / electrical contractors?

Since the fact that prior to January 2018, SANS 164-2 was listed in SANS 10142 as the “preferred standard” a moderate uptake was seen in the market especially via the DIY stores, which offered the combined SANS 164-1 and -2 products for approximately the past 5 years. However with the new legislation this has now become the norm.

Q: Given the fact that deaths arising from misuse of the old plugs occur every year in South Africa, do you think enough has been done to alert the man-in-the street to the new plug standard?

From my experience there have been very few recorded instances over the past 30 years, where the plug itself was the cause of death by electrocution, several other causes that include fires due to short circuits and lack of adequate earth leakage protection were among those found due to investigations by the Chief Inspector.

Q: I understand there is an adapter for the old plugs to fit into the SANS 164-2 plug.  How available are these adapters / where can one buy them?

Several Companies provide plug-in adaptors that fit into SANS 164-1 socket-outlets and have one or more SANS 164-2 configurations for 2-pin plugs, these are available at all supermarkets and DIY outlets.

Q: Would you advise homeowners to use the adapters?

Unfortunately life without adaptors and cord extension sets would be very difficult. The use of a “1 to 1” or a “1 to 2” adaptor is perfectly OK for most application where a conversion from the one standard to another is required, however plugging one adaptor into another is definitely not recommended.

Q: Is some effort being made to get appliance manufacturers to adapt to the new standard?

This is a sore point as most appliances are imported and there’s no regulation in place to compel manufacturers and importers to adopt the new standard. This should change gradually as more socket outlets are fitted to fixed installations and the demand grows within the market, by the consumer.

There has never been a “cut-off” envisaged for the transition from SANS 164-1 to SANS 164-2 and it is likely that the two standards will co-exist for some years to come.